I was always in plays in middle and high school, then I moved to LA for college (and, obviously, to become a movie star). Reading Artaud and John Guare during my freshman year of college started to seriously open my eyes to what the stage can do better than screen, and I've been really passionate about live performance ever since.

Tell me a little bit about "Daughters of Lot."

It's a neo-2nd wave feminist response to 3rd (or 4th?) wave feminism, set in an underground burlesque club and involving the Bible. And magic. YOU'VE NEVER SEEN ANYTHING LIKE IT.

The Spice Girls. The Pussycat Dolls. Every play that thinks it's "edgy" because it says things like "men want to have sex with everything."

My director, Rachel Kerry, and I started a company together in August 2010 called Brain Melt Consortium, and our first project was actually a staged reading of the full-length version of this play. We've been working very closely ever since. We found our stage manager, Mandy Kelsey, while working on our 2011 Fringe production, "The Flowers of Fantastico," and she's become and integral part of the company. Everyone else is new to BMC, but they have all been godsends. Molly Ballerstein, who's been working on really exciting projects like "Sex in Mommyville" and "Chimera" (COIL 2012), is our amazing assistant director, and our cast is phenomenal. I couldn't be more excited by 5 brilliant, gorgeous actresses.

BMC is putting up an awesome performance party at the Magic Futurebox in Brooklyn on March 31 -- "More Like the Rachel RADdow Show: An Unofficial Birthday Party for Rachel Maddow Celebrating the Ridiculous Circus that is Cable News." I'll be helping to produce that. I'm also in the process of developing a solo show with my friend R. Ernie Silva, who's been touring around for the last few years with his amazing debut solo piece, "Heavy Like the Weight of A Flame."

If you're the kind of person who always walks into a night of theatre hoping that it will change your life just a teeny tiny little bit, this show's for you. 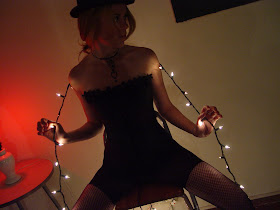