In today's world, where instant gratification is the norm, it is deliciously frustrating to know that there are some things you just have to wait for.  That anticipation and longing makes your appetite sharper and it's more exciting when the day finally arrives.  That's why I'm so eager to see the next two parts of Mac Rogers's new sci-fi series The Honeycomb Trilogy.  If the first play in the series, Advance Man, is any indication, Rogers has written another sci-fi hit (his earlier unrelated sci-fi play, Universal Robots, is one that I still rave about whenever the opportunity arises... like now).

Rogers strength (and it's one the horribly named SyFy channel could stand to learn for their movies) is that he spends time creating believable characters, and despite the sci-fi plot, he creates situations that ground the play in reality.  Cardboard characters are boring, no matter how good the special effects are.  Advance Man, at its heart, is a story about family.  First is the biological family of astronaut Bill (Sean Williams), his wife Amelia (Kristen Vaughan), and their children Ronnie (Becky Byers) and Abbie (David Rosenblatt).  It's also about the created family of Bill's team of astronauts, three years after their mission to Mars - Bill, Raf (Abraham Makany), Valerie (Shaun Bennet Wilson), Belinda (Rebecca Comtois) and Conor (Jason Howard).  And like all families, these two families have issues, and it's these issues that breathe life into these characters and fuel Advance Man.  Bill may be having an affair.  Conor was seriously hurt on the mission to Mars and is a permanent house guest of Bill and Amelia.  Amelia and Ronnie are at each other's throats in the way only mothers and daughters can be.  Abbie is an awkward dreamer.  And Raf seems to be faltering on his part of the mission.

What mission, you ask?  Well, that's where the story gets fun. Trust that the less you know, the more you'll enjoy the clever way Rogers teases the story out a little bit at a time, never revealing too much, until things start cascading toward the climax of the play.  Then it's like cresting the highest point of a roller coaster.  You see the huge drop ahead of you, and you know that things are going to get very fast and very scary.

The ensemble is strong in Advance Man, and features some standout performances.  Sean Williams, whose Bill is a modern Ward Cleaver with a touch of Jim Jones thrown in, is exceptional.  Becky Byers is outstanding as the rebellious daughter, Ronnie, and her scenes with Kristen Vaughan crackle with tension.  Jason Howard (who was amazing in Universal Robots) does a great job with the difficult, often barely verbal role of Conor.  David Rosenblatt and Becky Byers make convincing siblings - some of the best scenes involve them busting each other's chops or plotting together (and like real siblings, this even happens simultaneously).

It's always nice to see sci-fi wrested from movies and TV and brought back to the stage.  This is especially true when it is in the hands of talented artists like Mac Rogers and director Jordana Williams.  By relying on the storytelling and the acting, they don't need to force in a lot of special effects, taking the risk that those effects won't work or will seem shoddy to the audience.  When it comes to stoking the audience's imagination, less is often more.  Rogers and Williams hit that balance nicely. 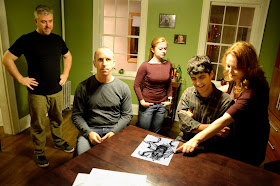