All fifteen-year-old David wants is to be a typical teenager, angry with everyone, especially his parents - two therapists who treat David like just another patient. But in this world even therapists have therapists, and with David’s rage mounting, and his parents’ marriage on the rocks, every member of the family finds themselves in treatment, and no one is getting any better. When David secretly tapes his father’s sessions with a troubled girl from David’s school and uses his knowledge to begin a budding romance – lives collide, therapists become patients, parents act like children and two teenagers must decide whether big problems can be solved by friendship alone. Heartbreaking, hilarious and perceptive, The Family Room, takes an incisive swipe at the dizzying revolving door of therapists in therapy, and the moments of true intimacy that stop us cold.

Aron Eli Coleite is an author of multiple works for the stage, screen and comic books. His background in theatre includes work as the Literary Manager, Dramaturg and ultimately, Artistic Director of Santa Monica’s Powerhouse Theatre Company. Coleite currently serves as a co-executive producer and writer on the new Oren Peli/Steven Spielberg TV series, The River, premiering on ABC in 2012. His prior television credits include Party of Five and the NBC crime drama Crossing Jordan. Most recently, he served as a writer/producer on the hit NBC series Heroes. For his work on Heroes, Coleite was nominated for an Emmy Award and won a People’s Choice, TV Land and Saturn Award. He is currently writing a pilot for a new CBS series to be produced by Jerry Bruckheimer, a project for the Syfy Network with acclaimed television and theatre producer Bill Haber, and a feature film for 20th Century Fox. Coleite is known to comic book fans around the world for his work on Marvel’s Ultimate X-Men and creating the series Vice and The Covenant for Top Cow Comics.

The World Premiere of The Family Room was produced at The Powerhouse Theatre. The Los Angeles Times lauded The Family Room as “A searching new play about the psychiatric profession and its discontents. The play’s authentic outrage and raw irony can’t be stifled,” and Back Stage West praised the play, calling it “A clever slickly written drama. A game of psychological musical chairs.”

Gwenyth Reitz’ directing credits include a production of Macbeth for young audiences with Lincoln Center Theater, the new jalopy, a site-specific dance/theater work produced by Dance New Amsterdam as part of their Leading Ladies Series, Spare Change at the Soho Playhouse and Class Behavior with the Vital Theatre Company. Gwenyth has served for six years on the Theater Commissions panel with the New York State Council on the Arts and is an alumnus of the Lincoln Center Theater Directors Lab. 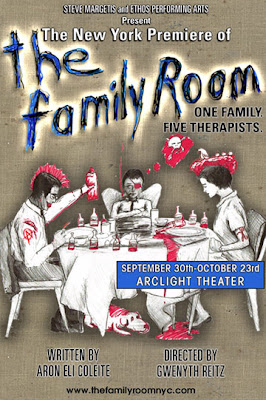