The Series A one-acts are: Staying Put, by Kathleen Warnock, directed by Vivian Meisner, with Laura Fois and Desmond Dutcher; The Takeover, by Barbara Lindsay, directed by Kelly Johnston, with Blanche Cholet, Richard Cottrell, and Caitlin Johnston; and Clean, by Audrey Cefaly, directed by Troy Miller, with Glory Gallo and Matt Stapleton.

An all-woman playwright lineup (and an all-male lineup in Series B) were a coincidence, according to EAT Artistic Director Paul Adams: “I was just putting them together the way they seemed to fit best, and it turned out that one night was all women playwrights and one was all men.”

Series A runs Monday and Thursday nights at 7pm, and Saturdays at 9pm.

Series B runs Tuesdays and Fridays at 7pm, Sundays at 4pm. 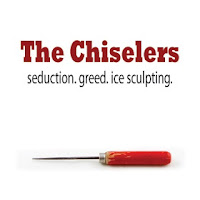 Series C is a full-length play, Mark Finley’s The Chiselers, directed by Melissa Attebery. Featuring Marie Wallace (Dark Shadows) as the grand dame of a Sacramento publishing empire, Karen Stanion as her ice-sculptress daughter, Chuck Saculla as the scheming gigolo, Eric Chase as the ambitious husband, and Andrea Alton as the youngster accused of… murder (or WAS it?), this dead-on farce takes us back to the days of the “go go ‘80s” and the dark places in all our souls.

The Chiselers will be performed Wednesday, Saturday and Sunday at 7pm, and Friday at 9pm.

All performances at TADA Theatre, 15 West 28th St. 2nd Floor (betw Broadway and 5th Ave.) Tickets are $18 (reduced price available for students and seniors). Tickets may be purchased prior to the show at the box office and online at http://www.emergingartiststheatre.org/, or by phone at 800-838-3006 (Brown Paper Tickets/Brownpapertickets.org)
Byrne Harrison at 6:33 PM
Share