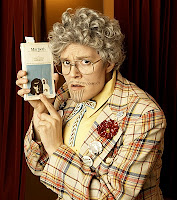 In Grade 8 I got the lead in the school play, and because I showed up two hours late to rehearsal, I got kicked out. My drama teacher really believed in me so instead of the play he asked me to do comedy bits in between the serious play transitions. I had a blast!! It was my first real live theatre performance and I got completely hooked on performance. Then in grade 9, I went to a school of the arts for ballet school, and I also started doing runway modeling. When I used to walk down the catwalk, I always smiled and looked at the audience instead of looking away distractedly like I was supposed to. I had a modeling mentor, and at that time she told me she thought I was more of an actor than a model. I applied to Bishop's University. At Bishop's I had many amazing acting teachers who really encouraged me to focus on theatre, and after several productions, I felt like I had found my home. I acted in several productions and decided upon graduating to continue my studies. I spent 4 years at Studio 58, graduated, and realized I was a clown, which then started my clown studies, while doing theatre and stand up comedy... I could go on for longer but will stop!

It's about a toothless, overweight, loveable loser who gets fired from his job and realizes he wants to play all the lead roles in Macbeth. The show highlights his ridiculous failures and missed attempts at brilliance as he stumbles through the audition of a lifetime.

I took a character workshop with clown master teacher Philippe Gaulier in Halifax. In class he asked us to come in class in disguise with the pleasure of not being recognized. I found an ugly old suit at a second-hand shop in Halifax. The character was a hit, and Philippe encouraged me to do a 90-minute show. I kept thinking one-man Macbeth... one-man Macbeth. It seemed absurd... I didn't even really like the play that much at the time. At the end of Philippe's class we did a class presentation, and that's what I did. Joe doing Macbeth. It was very well received, and my director, Adam, was in class assisting Philippe. We couldn't resist making a show. I won the caff touring lottery that year, so it seemed I was destined to tour the show!

I met Adam Lazarus at a show years back and loved his work. I knew he was teaching buffoon, so I took his class and we hit it off immediately. We created several characters together, and found our brains were very funny together. When I took the Gaulier workshop in Halifax, we bought my JOE costume together. It was his idea that I go into class as a man. So already back then he was directing my work. We have worked on two other shows since JOE. Mike Kennard of Mump & Smoot is someone I met over 15 years ago at the world street fest in Edmonton when I just started clowning. He taught me years later and came on as a creative consultant for JOE. We had made several masks together in the past, so we started this process by making a JOE mask, and we were able to discover a lot about the characater that way. It really shaped the material as well. He worked the tragedy of the piece, whereas Adam really worked the funny.

I have been doing festivals nonstop for over 5 years. This summer I plan to write and hibernate with my work for a bit. I am always performing, and I feel the need to regroup with my work, as I have several unfinshed projects that are demanding attention. I have a trip to Paris planned for April and continued studies with Francine Cote in May. Future plans to study with Philippe Gaulier.

if you see one show this year make it JOE. Eye magazine called it "one of the best times you'll have in theatre all year." It is certainly a good time and may change the way you see theatre. A lot of people who are tired and bored of the theatre have told me JOE reinspired them. In a strange way it is anti-theatre. I hate how boring and serious theatre can be and this is a rebellion against that. I studied theatre acting for over ten years only to realize I was a clown, and this show actually allows me to be both! Also it has been called "one of the weirdest shows.." at several festivals. I take that as a high compliment!