My great aunt Shirley was a seamstress and dresser at a community theater in Toronto. When I was a little girl she would get me season tickets to the shows and take me backstage to meet the cast and see the costumes. I guess that was when my love affair with the Theatre began.

Wow, tough one... My Grandmother. My best friend Aron who I lost 8 years ago. Madonna.

Year of the Slut is a one-woman show about a naive Jewish virgin from Canada who moves to New York looking for love in all the wrong places... and finds herself. I play 10 outrageous characters and have woven some of my provocative poetry throughout the story.

I had an idea to write this piece as a novel initially. A friend suggested I write myself a solo show to showcase my work and Year of the Slut just seemed perfect, so I ran with it.

Initially I worked with Jeff Murray directing the 1st workshop of this piece; we rehearsed for 3 weeks, mostly refining the story. After months of rewrites I worked with Vincent Tula for the second workshop, who helped me with my characters and finding my "voice". We rehearsed about two weeks. Due to lack of funding I wasn't able to get more rehearsal time with my directors so we huslted and made due with the time we had. Most of my rehearsal process was on my own in my living room. It was kind of lonely and made me miss being in a show with a cast. CJ Vanston (A Mighty Wind) composed the piano music underscoring my poetry, and Danielle Hobbs choreographed the movement that goes with it.

I will be taking Year of the Slut on the road after Frigid. I am also going to be shooting a TV Pilot in Los Angeles in March.

Year of the Slut
Written by Jennifer Lieberman
Presented by JJ Rockstar Productions Maple, ON Canada 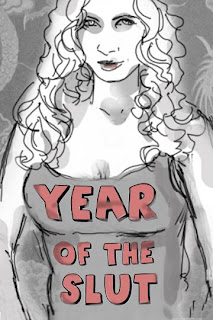