Here is a very short (and by no means exhaustive*) list of things that make me anxious:

I list these not just because (un)afraid is about fear and what causes it, but because I had to confront all of these personal demons during the performance. And if you share any of these particular phobias, you may have to face them, too. 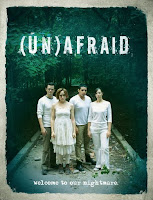 As with most performances by the Neo-Futurists, it's difficult to offer a simple review. By design, the performances are never the same twice. (un)afraid is broken into four sections, each section framed by a meditation on fear (some funny, some poignant, some disturbing). Each of the four sections features a short piece written by one of the performers. Only one of them will perform their piece in any given section. The other three go unperformed. So out of a possible sixteen short pieces, the audience only sees four.

That's why it's always worthwhile to see a Neo-Futurist show more than once.

Each of the short plays is drawn from the performer's own life. In the performance I attended, the most affecting was Daniel McCoy's piece on homophobia and bullying. Couched in terms of a boxing match, McCoy attempted to repent for the times as a teen when he stood by and let other kids get bullied for their sexuality. While primarily wrapped up in a fear of physical confrontation, McCoy also deals with the fear of being different, the desperate need to be "us," rather than "them," and ultimately, the fear of a part of oneself that is too painful to admit. Powerful and disturbing stuff.

That was just one of four well-performed pieces.

The ensemble is particularly strong, featuring Jill Beckman, Cara Jane Francis, and Daniel McCoy, all of whom are writers/performers in the Neo-Futurists' long-running Too Much Light Makes the Baby Go Blind, and Ricardo Gamboa, who is making his Neo-Futurist debut. Overall, the four work well together (and with their Minions - Jonathan Herzog, Mike Puckett, and Nicole Strawbridge), though at times Gamboa seems just slightly out of sync. Perhaps it is a matter of the other three performers having been fully imersed in the Neo-Futurist style for some time, while Gamboa is a newcomer. Rob Neill's direction is strong, and his use of the performance space (marvellously designed by Liz Jenetopulos) is excellent. In fact, all of the production values of (un)afraid are outstanding, due to longtime Neo-Futurist Technical Director Lauren Parrish.

If you are the kind of person who is really uncomfortable being forced to go from audience member to participant, I encourage you to push through the discomfort and join the show. It is an amazing and challenging experience.

*An exhaustive list would have to include being buried or trapped, drowning, snakes, and zombies. Being trapped in a small space with snakes and zombies while it fills with water would probably cause my head to explode.
Byrne Harrison at 5:20 PM
Share