MTWorks is pleased to announce UNDERWORLD IV: Broadway Understudies & MTWorkers will be held Monday, November 8th at 9:00pm at The Triad NYC (158 West 72nd Street between Columbus and Amsterdam).

"What a show. All of them, the young and the not-so, all with stars in their eyes. But then, their audience was equally afflicted. It was worth it. Had a couple of stars in my own eyes"
- Gene Paul, Theater Scene

All proceeds from Underworld IV go to MTWorks current 2010-11 Season, which includes the upcoming world premiere of award-winning playwright David Stallings' new play The Family Shakespeare, directed by Nicole A. Watson in April 2011 at The June Havoc Theatre.

All tickets are $30 (+2 drink minimum, cash bar) and are available online at www.BrownPaperTickets.com. Tickets may also be purchased in-person at The Triad NYC half hour prior to Showtime, cash only. 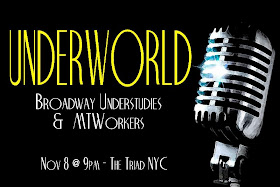