Interview with Seth Bisen-Hersh of BROADWAY CAN! A Concert for the Citymeals-on-Wheels and City Harvest 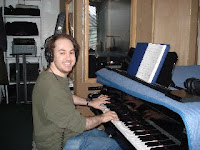 Seth Bisen-Hersh is a prolific and versatile New York City based musical theatre composer/ lyricist who works as a pianist, accompanist, musical director and vocal coach.

Bisen-Hersh made his professional cabaret debut at Don't Tell Mama with Two Singular Sensations, a battle of the ego through Broadway showtunes, co-starring Rori Nogee. Starting in 2003, Bisen-Hersh began doing nearly annual cabarets of his own material, commencing with solo acts then expanding to ensemble casts. Each cabaret consisted of 16-18 new songs grouped by theme: And Then She Dumped Me (2003), The Gayest Straight Man Alive (2004), Meaningful Sex (2005), Neurotic Tendencies (2006), Why Am I Not Famous Yet? (2007), Writer’s Block (2008) and I'll Relax When I'm Dead (2010).

Furthermore, Bisen-Hersh has developed two annual charity concerts of his work featuring Broadway actors: Broadway Meows for The Humane Society of New York, each summer and Broadway Can!, a can collecting concert each fall.

How did Broadway Can! come about?

The first charity concert we did was Broadway Meows in July 2009, which was a thank you to the Humane Society for saving my cat's life and not charging a fortune. After that great experience, we decided to do another concert during the holiday season, and I had a dream that we were doing a can raising drive called YES BROADWAY CAN! which was deemed too Obama-esque, so Broadway Can! became its title. This is our 2nd Annual one.

How do you recruit performers for the event?

Mostly through Facebook. I go through my friend list and start asking everyone I know with a Broadway credit. Also, with the stars I'm closer to I will ask for referrals. Actually, Facebook wouldn't let me go into my account without re-verifying it when I was writing so many strangers b/c they thought I was a stalker or something. Which I am, but that's a whole different story. Just kidding... mostly.

How did you choose this year's charities?

That was all Dennis Fowler! We wanted to find smaller charities that would be really happy to have us involved, and I think he probably did some google searches, and then contacted a few to see their reactions. I am thrilled with how the timing all worked out - our concert is two weeks before Thanksgiving, and we're giving all the money to Citymeals-on-Wheels for their Thanksgiving drive (They provide meals for senior citizens), and since they don't take cans, we decided to bring in a second charity, City Harvest, and give those to them for their Thanksgiving drive.

I understand this is the last time your fans will be able to see you for a while. Can you tell me a little about your new project?

Well, they can still come to my weekly showcases and watch my YouTube channel - youtube.com/sethbh42, but I am taking a 6-month hiatus from self-producing because I am exhausted and over-extended. I have 3 shows ready for Off-Broadway production, and I am going to take the time to focus on getting those produced and financed, not only in NYC, but around the country - all 3 are available for licensing at sethbh.com/shows3.html. There's LOVE QUIRKS which is an hourlong song cycle designed for colleges or black box theatres; STANLEY'S PARTY, a 50-minute musical based on the popular picture book, for children's theatres; and MORE TO LOVE, a two-act musical that takes place in a gym about accepting one's body, for community/ regional theatres.

But I think the new project you are referring to is my new web series: Every Day a Little Seth. It is still in its seminal state - I hope to film the first episode soon. Basically it's a shameless attempt to get an HBO sitcom. I am going to rant about situations and tell genuine anecdotes about my life, while illustrating how it could all be turned into a fleshed out show. Each episode takes its title from one of my songs, and that becomes the theme I will ramble about, and then at the end I will perform the song.

I think it'll be quite unique, and fairly humorous, and I am hoping to go viral... in the good sense of the word.