This month's title photo comes from Legs and All, currently at The Kraine Theatre, and features Summer Shapiro and Peter Musante. 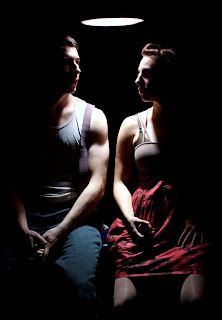 After winning the Festival Favorite Award at the 2010 FRIGID New York Festival, an award-winning, sold-out run at the 2009 San Francisco Fringe Festival, and their most recent run as part of the New York Clown Theatre Festival at The Brick in Williamsburg, LEGS AND ALL returns to Horse Trade Theater Group for a limited engagement, October 2-16 at The Kraine Theater.

A man in an attic meets a woman in a box. As they lure one another into their worlds, their curiosity unfolds to expose a hilarious, mind-bending, innovative allegory for the classic man-meets-woman story. Rooted in physical comedy and drenched in imaginative stage illusion, LEGS AND ALL is an inventive exploration of human loneliness set to an evocative tango-meets-bluegrass score.