From the press release, "CAPTAIN BRASSBOUND'S CONVERSION: A cult classic! One headstrong and determined woman sails to Morocco and takes on not only the infamous pirate Captain Brassbound, but a band of Arabs and the entire U.S. fleet! Shaw's rarely seen wild lark of a comedy about revenge, true love and high adventure is not to be missed!"

The Project Shaw monthly reading series is one of the best hidden secrets (if you can call a show that sells out every single production a secret) in the city. Top-notch performers, excellent plays (naturally), and a great raffle are almost enough on their own, but adding in the wonderful setting of the Players Club takes it to another level. If you are a fan of Shaw and have never been to this series, shame on you. The remaining shows in 2010 are How He Lied to Her Husband and Heartbreak House.

Tickets are available at www.projectshaw.com. 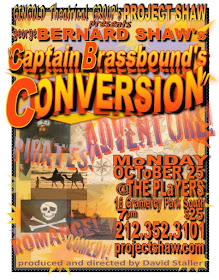