Clown Fest Interview - James and JF of Channel One 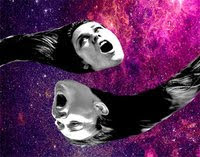 It's the future. There are only two people left and they're bored with themselves. They happen upon a group of people from the past. Then they discover that these people like TV, so they do TV for them.

We created a bunch of characters based on ourselves and people around us, and when we looked at them all together, we noticed they were a little off-center. Until we took a closer look and realized they were simply ahead of their time. So we set the show in the future.

What is your clowning background?

What would you tell someone who is afraid of clowns to get them to come to your show?

Taking risks opens the door for great things to happen. Like falling in love, for instance.

What is next for you after the New York Clown Theatre Festival?