Alvin and his wife are among the few survivors left after global warming floods the entire planet. After his wife dies of a fever, Alvin sees her soul descend into the ocean. Unable to follow her, he fears that he is doomed to a life of loneliness. That's when he hears the call from Earth HQ. They will be launching a mission to find a hidden paradise under the sea, man's last hope for continued existence, and the man who can find it will be a hero. Like Orpheus, Alvin descends into the watery underworld to find his lost wife and mankind's future. 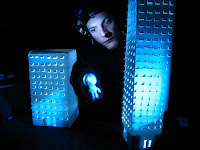 Tim Watts is a gifted performer, and Alvin Sputnik draws on his many skills as an actor, musician, animator, and puppeteer. Through this multi-media creation, Watts brings to life an undersea world full of delights and dangers, sacrifice and reunion. More than that, he has created a play that is wistful, amusing and inspirational. Though much of the play is non-verbal (who can talk at the bottom of the ocean?), this fascinating play and its charming leading man easily draw the audience in and keep them rapt until the play's lovely and satisfying end.

Anthony Watts, Tim's father, built the many sets and gadgets used in the show, much of which was created to complement Tim's animation. The elder Watts is an engineer, and his skill and ingenuity is obvious. Mat Cheethum's sound design is excellent, strengthening this already well-done show.

Alvin Sputnik is a beautiful, touching and inspiring piece of theatre and should be on everybody's must see list for the undergroundzero festival. To give you a taste of what the show is like, I've included a short video montage below from an earlier incarnation of the play.