How long have you been involved in theatre?

Well, professionally? I mean, I've been doing theatre-type performing stuff as long as I can remember, in school or with friends. My first "professional" indie theatre show out in the real world in front of a paying audience would have been in 1990, so 20 years now. Whoa.

What play had the biggest influence on your life?

Probably the 1984 restaging of Robert Wilson & Philip Glass's Einstein on the Beach at the Brooklyn Academy of Music. Or Richard Foreman's production of his Samuel's Major Problems at the Ontological. 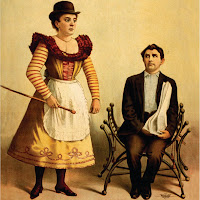 It's the actual wedding of my partner in life and work, Berit Johnson, and myself, done as a theatre piece examining our relationship, past, present, and future, placing it in the context of our lives and work, and searching for an honest way to publicly affirm our love in a way that means something to us.

What led you to write it?

Feeling we would have to do a public wedding, whether we wanted to or not (and in Berit's case, NOT), and as any wedding would mean less to us (if done traditionally) than one of our own theatre productions, I decided to MAKE it one of our theatre productions so it would at least have that much meaning to us.

What inspired you to apply for the Too Soon Festival?

Once we knew we wanted to do our wedding as part of this year's Summer Festival at The Brick, it was up to us as co-technical directors of The Brick to try and influence the staff to pick a theme that would work for our wedding. We think we, and they, succeeded.

What's next for you after Too Soon?

Our regular August repertory season, this year including Devils by John Whiting (provisionally, provided we get the rights) and an original play by myself, Spacemen From Space, a pastiche on B-movie serials of the 1930s and 40s. One dark nasty play, and one silly, light, fun play. A good rep season.