I was always putting on shows as a kid. I wrote, directed and starred in a film masterpiece called "Super Baby" when I was seven years old.

I look up to the classic lyricists like Lorenz Hart and Cole Porter. They are subtly clever, and then blow your mind 10 seconds later when you get the joke. 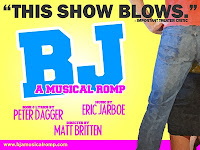 The show is about exactly what you'd think, blow jobs. That being said, it is the story of BJ's first day of college told very innocently; nothing pornographic or vulgar. At its heart, BJ is about growing up and facing your fears.

I was jamming with some friends at the beginning of senior year of college. It had been a dry spell, and I improv-ed the "Blue Ball Blues," which turned out to be a hit. I went home, wrote down all the lyrics I could remember, and then the whole piece grew around that.

What made you want to perform in an eco-friendly theatre festival like Planet Connections?

Conservation of energy and resources is important, and absolutely can be achieved in theatre.

Planet Connections is fairly unique in that a portion of the box office for each show is donated to a charity. What charity have you chosen and why?

BJ is working with the Organic Consumer's Association. I watched the documentary "Food Inc" last summer, and it profoundly affected me, more so than any movie, play or work of art up to this point. I hope to fuel the organic revolution by promoting food free of pesticides, hormones, and antibiotics, and alerting people to the danger of overly processed and genetically modified "food."

I'm collaborating on a musical-spoken word-cryptozoological-extravaganza going up in Brooklyn on August 1st.

And finally, if you could go back in time and meet yourself as a kid, what advice would you give your younger self?

I would make my younger self learn how to do back-flips, because they are probably way easier when you're a kid!