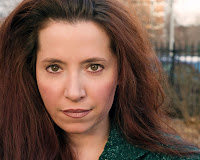 I was born into it, really. My parents are in the industry. My mother, Ann Wedgeworth, is a Tony-Award-winning actress of stage, film, and TV; my father, acting teacher and director Ernie Martin, was one of Lee Strasberg’s protégées, head of the Ernie Martin Studio Theatre in the 80s (where the Mint is now) and a former Artistic Director for the Actor’s Studio West Coast. I got away from theatre for several years when I lived in St. Louis, but even then I was doing some form of entertainment, i.e. directing and hosting live television (the equivalent to NY1 here in NYC) and as a Disc Jockey for radio. Eventually, in 2000 when I moved back to NYC to be closer to my family, I became involved slowly but surely in what my roots really were all about.

Well I am both an actress and a director, so my influences are spread out across representatives of both mediums. There are so many to name; I would honestly have to start with my parents, for they are brilliant, and were my first teachers. In terms of directing theatre, specifically, I would have to include Mike Nichols, whose direction of Hurlyburly in the 80s was amazing – it is one of the plays that has always stuck in my mind; Sam Sheppard (whose directing I was able to see when my Mother was in the original A Lie of the Mind). I also really love Alex Dinelaris - another award-winning playwright who is a wonderful director – who directed me in Hello Out There. Another would be Will Frears, who directed Alex’s Still Life at the Lortel; the staging he did for the show really inspired me visually.

Good Lonely People is on the surface about a fractured, albeit religious, family coming together on the night of President Obama’s election, all of whom are Democrats in a mostly-Republican area, yet are extremely divided about the issue of Proposition 8 and homosexuality in general. It is, however, also very much about how no matter what your political or religious affiliation, one’s actions speak very much louder than words, how people who love one another deeply also wound others – and how they find the path to middle ground.

What inspired you to direct it?

Besides the fact that it’s a great play and is produced by MTWorks, of which I am a company actor, I was inspired because I have been witness first hand to similar events that take place in the play. I have gay family members and friends who, although they are loved deeply by others in the family, are either not allowed to be themselves completely or have been shunned. I also grew up in New York City, and saw first hand how parents of many children I went to school with would march for every cause on the planet, but often would be emotionally and physically neglectful parents (but with money)…and it always made me think that no matter how many buttons they wore or bumper stickers they had, their actions at home spoke volumes.

What made you want to perform in an eco-friendly theatre festival like Planet Connections?

I think it’s a wonderful idea to give back to the community more than just creatively, and this is a great way to do it. I love the idea of providing the Off-Off Broadway community the opportunity to raise awareness for the environment as well as charities and organizations that many audience members may not even know about. It’s a great opportunity to do something positive for others as well as yourself.

Planet Connections is fairly unique in that a portion of the box office for each show is donated to a charity. What charity have you chosen and why?

We have chosen PFLAG – Parents, Family & Friends of Lesbians and Gays - as our charity (organization) to donate proceeds to for a myriad of reasons. At the top of the list are: 1) It’s completely appropriate for the show – if the characters in the play had the opportunity to benefit from an organization like PFLAG, their lives would be so much easier. 2) It’s an organization whose mission is very important and dear to most everyone involved with the production on various levels. 3) PFLAG needs more exposure than ever, as we can see even in our current political climate; one thing I find interesting is that no matter who is in office, the issue of homosexuality and rights are always in the eye of a storm.

I will be directing Jim Tierney’s The Banshee of Bainbridge in the Fringe Festival, which is very exciting! I’m also putting together readings of revivals that are very dear to my heart, both as director and actress – using actors that I am familiar with, which is a project that has been in the works for some time (I go into depth about it more at my website MartinActingStudios.com). I also teach acting classes at both Martin Acting Studios (my school) and Hunter College, although this summer is so busy I’m only privately coaching until fall when I start classes up again. I’m looking forward to what the fall brings – some acting possibilities are on the horizon, and it would be nice to go back to that soon. I also write reviews for The Happiest Medium.

And finally, if you could go back in time and meet yourself as a kid, what advice would you give your younger self?

HA! Do you have an hour? I suppose a couple of things I would say are: 1) Don’t take anything for granted: people you love, a sunset, having good health; and in regards to this interview, especially the creative gifts that you have been given – make use of them always. 2) Be proud to be YOU, don’t try to be anyone else, because your unique aspects are to be celebrated and can be used in great ways. 3) The choices you make will effect things later in life, so make ‘em count.