Interview with Rob Neill of the New York Neo-Futurists 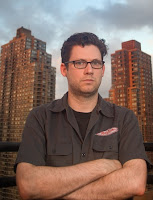 Rob Neill is the Managing Director of the New York Neo-Futurists. He studied at Grinnell College, the London Academy of Music and Dramatic Arts, the Warsaw Academy and The National Theater Institute. Rob moved to Manhattan in 1995 to write and perform Too Much Light Makes the Baby Go Blind and continues to work as a Neo-Futurist as well as with numerous other New York companies. Rob works for a commercial production company, writes poetry, teaches and has recently enjoyed working with a variety of great artists at the Ontological, the Public, PS 122 and the Kraine.

I recently spoke with Rob about the upcoming all poetry version of Too Much Light Makes the Baby Go Blind.

I know you've had theme shows in the past, though the one I'm most familiar with your annual Gay Pride Weekend show. Is this your first poetry themed version of Too Much Light?

Yes, it is our first full poetry themed TML. Last year we had such success with the ‘Half-Nekkid Shows’ we decided to expand our theme weekends this year.

What was your inspiration for doing it?

April is National Poetry Month. We have done several shows at poetry venues like Bar 13 and Bowery Poetry Club. A good number of our plays are in the realm of poetry, and several of us have performed solo on the poetry scene, so we thought we’d reach out with a whole show.

Are these all new plays, or are some of them being brought in from past shows?

Many of them are from past shows, but there will be some new ones as well. That is often how we do themed shows—plus it gives us a chance to bring some great work back into TML.

Should we expect to see any tributes to or parodies of famous poets?

We are still finalizing the menu, but that could happen, there are a few options of plays up for consideration that were inspired by the likes of Poe, Kerouac, Shakespeare, Mark Strand...

Who will be performing this week?

Any other theme shows planned for 2010?

We're brining back our Gay Pride shows the final weekend in June, the Half Nekkid shows in August, and the Best of 2010 in mid-December.

Besides the themed shows, we look to expand our ensemble over the summer, create several short Neo-Futurist films, perform at the Americans for the Arts Half Century Summit in June, produce our new fall main stage show, (un)afraid, in October, and celebrate our 6th year with a gala in November!

Too Much Light Makes the Baby Go Blind: 30 Poems in 60 Minutes will be performed April 30th and May 1st at the Kraine Theater, 85 E. 4th Street. Click here for tickets.
Byrne Harrison at 9:00 AM
Share