I've been interested in writing as long as I can remember, but I was late in coming to theatre. It wasn't until a few years ago when I became involved with the Youth Program, and later the Young Creators' Unit, at Buddies in Bad Times in Toronto that I started seriously considering theatre.

My biggest influences come from the comedy I loved as a kid - The Muppets, Monty Python, Ellen Degeneres' stand up, the Kids in the Hall - anything that was a little awkward and off-beat has always thrilled me. When I was first faced with the prospect of coming up with a solo show, it was Lily Tomlin and Jane Wagner's The Search For Signs of Intelligent Life in the Universe that really gave me an idea of what that format could deliver. 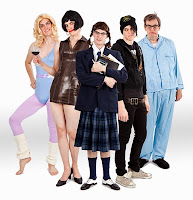 Fishbowl is character comedy. The show is populated by five characters who are a little cartoonish, a little silly at times - which I think we all are, when we're viewed out of context. And, like everyone, they've all got their secret desires, and there's so much about the world and the way it all works that they'll never understand.

Fishbowl grew out of characters that I had written some one-off monologues for. Based on these, I was accepted into the Young Creators' Unit at Buddies in Bad Times - which required that I perform my own work. Before this I had no interest in performing, and was even reluctant to get on stage. And yet here I am.

Evalyn Parry, my director, has been with the show since before the beginning. She's the one who suggested that I pull some of these characters together into something bigger, and has been along for the ride since then. Sarah Olmstead, my producer, has been a friend for a while, but this is her first run of the show as producer. It's been fantastic having her on board, as she's strong everywhere that I'm weak - planning, paperwork, finances. Working on FRIGID has brought us a lot closer together. We'll be sharing an air mattress in Brooklyn until the end of the festival. But it's not like that.

Fishbowl will be touring to Hamilton, London, and Minneapolis. As for me, I'll be working on a new play exploring gay nightlife and the book and lyrics for a film noir musical - both comedies, of course.

I know sometimes it's hard to take a risk on theatre - you could end up spending an awkward hour sitting in the semi-dark, bored out of your mind and wishing you'd bought a movie ticket instead. But with Fishbowl I can promise that, even if you don't get enlightened, you'll at least laugh a lot. And if you don't, the FRIGID festival is small enough that you can always track me down and punch me in the stomach later. And that's worth the price of admission, isn't it?