I started in theatre in high school, as an anti-war demonstrater in a production of Antigone set in the 1960s. Hooked.

My biggest influences as a playwright are Tennessee Williams, Harold Pinter, Terrence McNally, and Donald Margulies.

I'll let the cast tell you about it:

Margo Brooke Pellmar (Jo): Its a love story about chance and timing and defeat and struggle ... and that's just the love between you and you ... then when somebody new is added ... you get this play.

Solomon Shiv (Joe): Two Partners. Each with their own Civil war. That's four sides trying improbably to win. Trying to control the Perfect Mess. Relating to failure. Discovering what was lacking. Somewhere, Time may have figured into the equation and there were some transformative ramifications.

Tamar Pelzig (Teri): Four Quarters describes the journey of one to themselves through a not so simple love story.

Omer Barnea (Terry): The various parts of myself and ourselves are in constant movement with parts that are harmonious and merge well into the other parts, and parts that are kept private and rigid due to our fears. This play is about the fluctuation of love and all of it's inhibitions and a certain triumph of communication despite all fear. 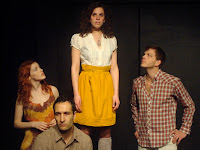 What inspired you to write Four Quarters?

The initial concept of two actors portraying one character came from a friend of mine, Jim Williams. From that, I started exploring the times in my life when I have been two different versions of myself.

This is the second production of Four Quarters, so the development was primarily done back in 2002 when we were at the Fringe. However, I met Margo at an audition for another show of mine in 2008, loved her work, and showed her this play. She brought in Tamar, Solomon, and Omer and the five of us took off on this incredible journey. The four of them have known each other variously for many years--they all studied at Circle in the Square and were friends prior, Solomon and Tamar live together, and Tamar and Omer have known each other since they were teenagers living in Israel. I'm actually the odd-man-out, which is fabulous.

Hopefully I'll have another show this year at the Midtown International Theatre Festival. I'm working on a series of three companion one-acts with an old friend who is a professor at Paris Junior College in Paris, Texas. The plan is to develop the three pieces as a single show down there and bring the students up to NYC to perform in the festival.

Margo Brooke Pellmar (Jo): This is a touching show and we take off our clothes ... The play is open to discussion. Its thoughtful. The gender play is seamless.

Solomon Shiv (Joe): I can't think of any higher honor in theatre than to be part of the kind of play that confuses or engages the hearts 'n' heads of its audience.

Because each actor is playing a SIDE of a flawed human being, characters may be more intense within their opinions, seemingly flat or two-dimensional at the outset. As these 'Sides' or 'Quarters' begin to mingle and collide and affect, the identities begin reflecting our own familiar (and quite wonderous) confusion. Sure characters run an 'arc' in all kinds of stories but there aren't many that go at this way. It is unabashedly lost but not necessarily hopeless.

Tamar Pelzig (Teri): It will make you THINK -- Sometimes it's fun to expand your mind, and not just escape it. We all have conversations with ourselves ... and after watching this show, you might learn to speak to yourself in a much more loving way. The idea in the play is 'outside the box'. and too many shows out there are very much 'inside the box' ... besides, it will make an excellent conversation piece!

Omer Barnea (Terry): They should come if they feel like participating in a real process. It is not often, in my experience, that a true, exploring, curious, brave process is found in theatre. This is the real deal right here. Some guts and raw reality are thrown here in front of you -- some real hardcore unknowns. There are at least five individuals who are taking their sweet ass time to delve into a really good piece of writing and doubt every line of dialogue and syllable in it until life naturally occurs in the rehearsal room. Nothing ever gets done twice here, and this is what art (and life) is all about.

Christopher Heath (playwright, director): This cast. This cast. This cast is the most talented, fearless, raw, hilarious, exciting, open, interesting, hot, intelligent, and fun cast I've ever seen, let alone had the fortune to work with. Come to the show to see these amazing four future stars. You won't be sorry.