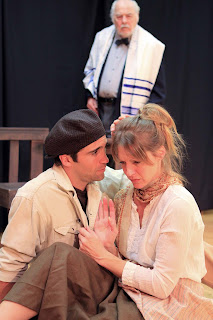 There are any number of plays out there about families with a strong patriarch and the children that forever seem to be causing him grief. Perhaps the emphasis is on the father, perhaps one of the children. Perhaps it's a comedy, perhaps a drama. But either way, it has been covered numerous times.

That's what makes Dana Leslie Goldstein's latest incarnation of Next Year in Jerusalem, her prize-winning play about three generations of a Jewish family in New York, a pleasant surprise. It feels at once new and exciting, but there is also something comfortable about it. These are not characters you have seen before, but they are familiar nonetheless, and that familiarity makes it easy to slip on this play like a favorite shirt. With Goldstein's strong writing and the cast's remarkable work, it would be hard not to care for the Mendels and the story that spins out over the course of the play.

Abraham Mendel (Burt Edwards and Jake Robards as the old and young versions, respectively) has lost many things over the course of his life. He fled Europe at the start of WWII with his brothers, taking Anna (Elyse Mirto), his young wife. to Palestine. After the birth of Israel, the event he had most longed for, he left it behind at the insistence of his pregnant wife who wanted the safety of America for her children. In America he lived for those children, building lives for them that he thought would be safe and permanent.

Though his children, bohemian Faustine (Jodie Bentley) and housewife Rachel (Dee Dee Friedman), love him, the lives he has created for them seem stifling. Rachel, trying to please her father, marries Lee (Timothy Scott Harris) and has a daughter (Sara Romanello). Faustine, not one to be told what to do, rebels against her father, becoming a lingerie model living in the East Village. Abraham is shamed by her life, only grudgingly admitting that independent and hardheaded Faustine is more than a little like him.

Things come to a head at Abraham's Passover dinner, leading to great changes for the entire family. 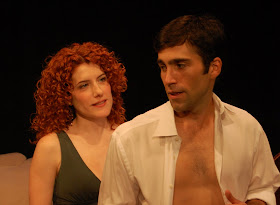 Next Year in Jerusalem features Dana Leslie Goldstein's strong writing and a well-told story. Production values are good, particularly Duane Pagano's versatile set and lighting, and Anne E. Grosz's costumes. Acting is strong across the board, with particularly good performances given by Burt Edwards as Abraham, Dee Dee Friedman as the tightly wound Rachel, and Jodie Bentley as Faustine. Jake Robards, in dual roles as Young Abraham and Ari, an Israeli lawyer with whom Abraham sets Faustine up on a date, is outstanding. His scenes, especially as Ari debating with Abraham or flirting with Faustine, are some of the best in the play.

An excellent production of a very good play, Next Year in Jerusalem is well worth a look.