How did you first get involved in theatre?
I first started writing plays in high school and ended up moving from central Illinois at the age of 17 to study Dramatic Writing at NYU. It’s great to come back to New York with Abe.

I've always loved theater. My sister is an actor and I grew up watching her perform.

What is your show about?
It's broadly about a "trial of the century" where a teacher is prosecuted for telling her 4th-grade class that Abraham Lincoln was gay. It's very loosely based on "Inherit the Wind," telling the story of the trial through the eyes of the prosecutor, the defense attorney and the reporter from the big city sent to cover it.

What inspired you to write it?
I was fascinated by the controversy surrounding Lincoln's sexuality. It seems to provoke genuine furor from some and complete befuddlement from others. As I thought of our current national division over issues of sexuality, I became very interested in examining our current "house divided" with Lincoln as the entry point. That, and I thought there were lots of opportunities for cheap laughs and splashy dance numbers. 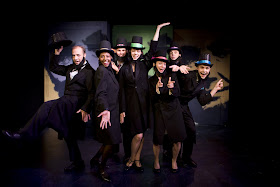 Who are your collaborators and how long have you been working with them?
Our Fringe production is being produced by many organizations and individuals from the Bay Area who have been involved in the play's creation from its beginning: BlueRare, PlayGround, San Francisco Playhouse and Tom Swift.

BlueRare is a multimedia production company that made the entire Fringe production possible by bringing all the players together. Jill Matichak, their principal, has been our champion and hero in getting the show on the road.

PlayGround originally commissioned the play. They're the Bay Area's leading incubator of emerging playwrights, and we've been working together since 2001. They gave the play its first workshops and dramaturgical support. There would be no Abraham Lincoln's Big, Gay Dance Party were it not for Playground and Jim Kleinmann, their Artistic Director, who selected the work for a commission.

SF Playhouse produced the world premiere, and it's their production we're bringing to New York. I had collaborated with SF Playhouse on the world premiere of my play, First Person Shooter (also commissioned by, and co-produced with PlayGround), in 2007, so we have a terrific and lasting working relationship. Bill English, the Artistic Director of the Playhouse, designed our ingenious set and helped me shape the play from its earliest drafts.

Tom Swift, one of our producers, is an old friend who inspired some key aspects of the play and helped me hone the work with key bits of advice.

In terms of the creative staff, we've all been working together now for at least a year.

I met Chris Smith, our director, through PlayGround several years ago. He directed the world premiere and has been our leader and organizer in getting this play to New York.

Finally, six of the seven actors were in the original world premiere production and stepped up to make the journey out East. We developed a tight bond putting the show up in the first place, and we're all delighted to be working together again. Our seventh actor, Kate Castillo, actually appeared in the world premiere of First Person Shooter, so we've collaborated together before and she's fit right into our team.

So, as you can tell, it's a rather closely knit band of Bay Area players bringing the show to the Fringe.

Fringe shows are notorious for their short rehearsal schedule. How has the rehearsal process been?
Well, it's been short, but we're bringing the original production. There were over 40 performances at SF Playhouse, so mostly it's been "refreshing" rather than creating something ex nihilo.

What's next for you after Fringe?
While I lack the ability to read the future, I'm going to guess there will be sleep and rampant intoxication.

If you mean theatrically, I'm working on an adaptation of Euripides' Alcestis with SF Playhouse and a new play called Blastosphere! that I'm co-writing with fellow Bay Area playwright, Geetha Reddy. Blastosphere! will world premiere at Central Works in Berkeley later this year. But first, sleep and booze.

Visit FringeNYC for more information.
Byrne Harrison at 11:37 AM
Share