Finding the Rooster, Terence Patrick Hughes' second installment in his ten-play cycle The Trials of Oscar the Great, is a strange little play. Mind you, strange is not a bad thing. Strange can be unique and fascinating or creepy and offputting. Finding the Rooster manages to be all of that and more. 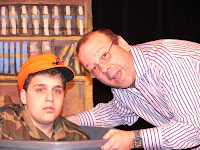 The story, set in mid-1960s New England, follows the disintigration and rebuilding of the Fine family. Richard (Jonathan Harper Schlieman) and Evelyn (Kathryn Neville Browne) are in the middle of a nasty divorce brought on by Evelyn's alcoholism and Richard's emotional distance after the death of their elder son in the war. Their younger son, Oscar (Dave Benger), has taken the death hard as well, becoming fascinated by Holden Caulfield and wearing his dead brother's army jacket. Unable to deal with the boy, Richard decides to have him disassembled, literally, and shipped to a military school. The company handling the job sends the cheerfully crass Stoker (Reggie Oldham) to dismember the boy. Evelyn tries to thwart Richard by bringing in her delusional brother Pinkie (Kevin Hauver), a WWII war hero and self-proclaimed friend to his generation's greatest writers. The only member of the family who seems to even notice Oscar as a person, Pinkie uses his storytelling gifts to comfort the boy even at the risk of holding himself up for ridicule by the overbearing Richard.

As the dismemberment and planned reconstruction of Oscar indicates, this is not a realistic play. There is a hefty vein of absurdism running through this odd mix of drawing room comedy and family drama.

War plays a huge part in this play. Richard has made his fortune as an arms manufacturer. While this has made him rich, it has also cost him his son. Despite this, he is willing to send Oscar to military school because he knows no other way to deal with complicated things. Pinkie's experiences in WWII have left him living in a fantasy world, one that he is eager to share with young Oscar. Evelyn deals with the death and destruction in the only way she knows how, by drowning her sorrow in alcohol and staging an affair with a younger man. Like war, it takes a common enemy to bring the Fines together, in this case, a flock of rampaging divorce lawyers bent on taking Oscar, another wonderfully absurdist touch.

While Hughes' script does have some flaws, it is clever and fascinating overall. His take on war and the havoc it causes makes for an entertaining play. The production's weakness comes not from Hughes the playwright, but from Hughes the director. As a director, Hughes lacks the strength to coax subtlety from the actors' performances, and perhaps the distance needed to smooth over some of the rougher portions of the script. From a purely technical standpoint, his direction features awkward blocking, unmotivated movement on the part of the actors, and listlessness where there should be crackling, electric energy. Of the actors, Kevin Hauver gives the best performance, but Pinkie is the most fleshed out character. Dave Benger gives a solid, though occasionally unpolished performance as the young Oscar. His scenes with Hauver are by far his strongest, and the chemistry between the two actors is excellent. Reggie Oldham is amusing as the vulgar yet charming Stoker. Some of his humor is undercut by awkward timing, though again, some of this falls back on Hughes' direction. Schlieman and Browne as the Richard and Evelyn seem like cartoon versions of bickering adults, skating on the surface of their characters without showing any real depth. This may have been intentional, but if so, it is jarring.

Finding the Rooster is an intriguing play that has been given a mediocre production. It left me interested enough to want to see future installments in The Trials of Oscar the Great, and since you're always supposed to leave your audience wanting more, that's a good thing.

Fridays and Saturdays at 7 PM; Sundays at 3:30 PM
Through June 7th

Tickets are $20 for adults; $15 for students and seniors
Tickets can be purchased on Theatermania or at the 13th Street Rep box office.
Byrne Harrison at 7:25 AM
Share
‹
›
Home
View web version