After a sold out run at the Absolut Dublin Gay Theatre Festival, producer/director David Drake and stars Scott Douglas Cunningham and Spencer Keasey (a/k/a Spencer Quest) are bringing James Edwin Parker’s 2 Boys in a Bed on a Cold Winter’s Night back to Provincetown this June for a nine-performance limited engagement. Returning to the Art House Theatre -- where the show was a runaway hit for two smash months last summer -- 2 Boys in a Bed… will play the first two weekends in June - the 5th, 6th, 7th and 12th, 13th, 14th, with three extra performances on Tuesdays June 9th and 23rd, and Wednesday June 24th. All performances are at 9PM. 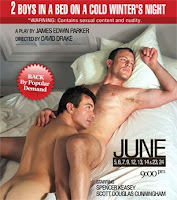 Performed without an intermission, the 65-minute play explores the emotions and needs that arise between two gay men after a one-night stand in New York’s Greenwich Village.

2 Boys in a Bed... contains nudity and sexual situations and is for adults only. To see the show's trailer, click here (features some fleeting nudity).

The Art House Theatre is located at 214 Commercial Street, Provincetown, MA. All tickets are $28, and can be purchased in-person at the Art House box office, daily after 2PM, or online.

“Intelligent, moving and superbly performed, James Edwin Parker’s play is in the tradition of Terrence McNally, tracing the obstacles to communication, intimacy and love in 1980s Manhattan, sensitively realized by director David Drake.