Clowns exist in their own pocket universe. A point from which they can project everything from a childlike innocence to a bit of misguided whimsy, a can-do attitude, or a feeling of being slightly apart from everything else. All as they deal with whatever situation they find themselves in. Such is the effect of Slava’s Snowshow. Created by Russian performance artist Slava Polunin, this absolutely delightful undertaking has returned to the stage just in time for the holidays. First seen in in 2004, the show reached Broadway four years later and now makes a triumphant return there at the Stephen Sondheim Theatre.

When seeing this rotating company of clowns upon the stage, (the actual members performing often changes from day to day) an image of a moth-eaten goony bird comes to mind. The group, except for the lead clown, clad in floppy hats, oversize coats and oversize shoes as they shamble about in a sort of parody of conformity. That is, until someone or something shakes things up a bit. Though as quickly becomes obvious, they're not always the brightest lights bulbs in the drawer. A point made clear when one of the group tries to outsmart the others over a bit of food, only to fall victim to the very trap he set for everyone else. Other slightly off-center occurrences can be seen during encounters with giant telephones; a jacket on a hanger which begins to have a personality all its own; and a tiny room - complete with table, chair and occupant – that's set on an angle. At least that’s how it appears to those of us observing the action from a "normal" plane of reality. 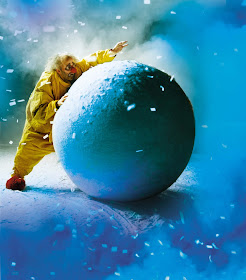 Deeper meanings aside, the chief attraction of the show is the window it offers to this very unique wonderland. One containing odd landscapes, giant balloons, and a massive blizzard of white. Everything presented with just enough familiarity to partially ground things in the real world. Thus allowing the audience to easily relate to what’s happening while they go quite willingly along for the ride. The folks watching all this getting continually involved in the story whether they want to or not. Thanks to some the company members who continually and enthusiastically interact with those in attendance.

Presented with almost no spoken dialogue, the use of music plays a key part in the festivities. Each such interlude meshing perfectly with the comedic elements the performers bring forth in the separate segments. Among the music used are the themes from “Peter Gunn” and “Chariots of Fire”. The latter featured in a sequence with a sail boat, an ocean liner, and a shark; among other elements. 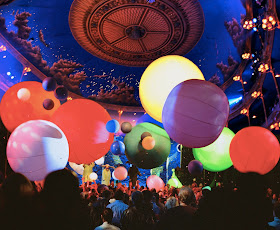 Children will delight in this very enjoyable offering – Indeed, I often heard shrieks of glee at the performance I attended - while adults will get a chance to become reacquainted with their own inner child as the show progresses. After all, there is something very appealing about seeing a clown with a butterfly net as he attempts to catch, well, whatever. Events eventually culminating with a comic confluence that makes one feel as if it’s the planets themselves that are colliding. The entire experience being one you will not soon forget.

A treat for all ages, Slava’s Snowshow is the perfect antidote for the holiday blues and one show you very definitely do not want to miss.

Big Apple Circus - Thrills and Fun for All!

The most important element of any circus is the ability to instill feelings of joy and amazement in its audience. Something Big Apple Circus, now beginning its 42nd season, repeatedly provides. The audience responding with continual and enthusiastic applause as they witness attractions guaranteed to make one cry out in delight or gasp in wonder. This one-ring extravaganza currently ensconced under a gigantic big top at in .

The fun starts the moment one enters the circus grounds. As ticket holders get to walk through a sort of midway that offers everything from cotton candy and snow cones to ice cream and pretzels. There is also an area for adult beverages, should those of a certain age so desire. And of course, there is popcorn. Pieces in boxes one can munch on, and pieces the size of small boulders (appropriately colored) the younger set can investigate. Members of the Big Apple troupe - including a rather impressive fellow on stilts - mingling with the audience before the show begins. There’s even appropriate music provided, with such songs as “Lollipop” and “Sunshine, Lollipops and Rainbows” heard over the sound system.

Once the circus proper begins, the show's thrill factor makes an appearance rather quickly. Thanks to, among others, Maryna Tkachenko and Tetyana Yudina, two Ukrainian aerial acrobats. Particularly heart-stopping is a sequence where one of the two supports the other via a strap in her teeth while being suspended by a wire from the ceiling. Did I mention this takes place as they are twirling around in mid-air without a net? Other acts that fall into the “don’t try this at home” category involve a performer (Jayson Dominguez) jumping rope atop a continually moving Wheel of Death. As well as a sequence featuring a person doing a handstand on the handlebars of a bicycle, on a tightrope, more than 30 feet above the floor. 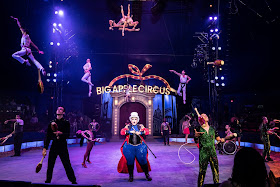 One can’t help but be impressed by the level of control the performers need to have over their body's muscles in order to make all these feats come off as planned. The intense concentration often clearly etched on their faces. Not to mention the tremendous trust they have with those they work with. One person holding onto a pole while completely parallel to the floor as another performer was balanced on their body being one such example of this. As was the splendid work done by the acrobatic Aliev Troupe; whose performances on the tightrope and the trapeze yielded more than a few electrifying moments.

A bit closer to the ground, one could enjoy the efforts of horse riders Caleb Carinci and Renny Spencer. Carinci at times leaping from one animal to another while both were in motion. Also quite fun are the various routines performed by the Savitsky Cats. A group of very talented, and occasionally temperamental “acrocats” making their Big Apple Circus debut. There were also some rather inventive juggling routines; such as one that featured open umbrellas, courtesy of Kyle Driggs. 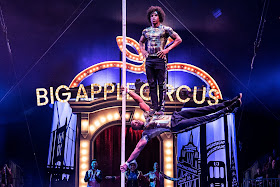 Comic relief is provided by a large purple pigeon (Amy Gordon). While she hasn't quite gotten the hang of flying yet - she's afraid of heights - she's more than happy to strap on some roller skates, or let loose with a few pigeon-related puns every so often. The various events, some of which include a bit of audience participation, all taking place under the watchful eye of Storm Marrero; Big Apple Circus' Brooklyn-born female singing ringmaster. Ms. Marrero proving to be quite the master of ceremonies. She introducing the different acts and inserting herself into the ongoing narrative when needed. The work by directors Cecil MacKinnon & Jack Marsh, composers Ada Westfall and Janine Delwarte, and costume designer Emilio Sosa, as well as the music provided by the live in-house band, all go a long way towards making the show a totally enjoyable experience.

Big Apple Circus succeeds so well thanks to its ability take the audience out of themselves and put them completely in the moment with the action taking place. Be it kids “oohing” and “aahing”, or adults re-discovering their inner child, the end result is one of sheer delight. Go make plans to see this one. Now. Whatever your age, you’ll be very glad you did.