Behind the Scenes with Blue Man Group

Tomorrow, young creatives (13+ and, with parental guidance, even younger) will get backstage and behind-the-scenes access to the famous Las Vegas stage production of the Blue Man Group.

But they aren't the only ones who get to see how the magic is made.

On Friday, August 8th, Maker Camp will feature a team of Blue Man Group's performers and technicians who will show campers their creative process and demonstrate how their customized instruments are created and played. Want to see how it's done? Then watch Maker Camp’s weekend project, Raspberry Pirate Radio! Tune in to +MAKE at 11am PT (2pm ET) for the live field trip.
Byrne Harrison at 10:14 PM No comments:
Share

Interview with David Lawson of The Astoria Bookshop Storytelling Show

Most people who live in New York know that the performance scene is not limited to Manhattan.  Travel to any borough and you can find outstanding shows featuring some amazing talent.


In Astoria, actor David Lawson hosts The Astoria Bookshop Storytelling Show, a monthly series which offers anyone the opportunity to tell their story in front of an audience.  Having seen several of David's past projects, I was eager to get a chance to discuss this latest venture with him.

How did the Storytelling Show come about?

I've been doing one-man-shows consistently for seven years now. Yet only in the past year I've realized so many comedy clubs and other venues in New York have events where I could frequently perform, and develop new material, in the same vein as the solo shows I've been doing. Obviously, yes, there are many venues to work on jokes and stand-up. But places like UCB East on the Lower East Side and The Creek and The Cave in Long Island City and Over The Eight in Williamsburg host events where you can tell stories to an audience of strangers. Not only can you develop work and see if that idea you had actually works well on its feet, but often at these shows you hear incredibly well-crafted stories done by great performers. I decided to host such an event in my home neighborhood of Astoria.

The Astoria Bookshop is a great local venue.  How did you start working with them? 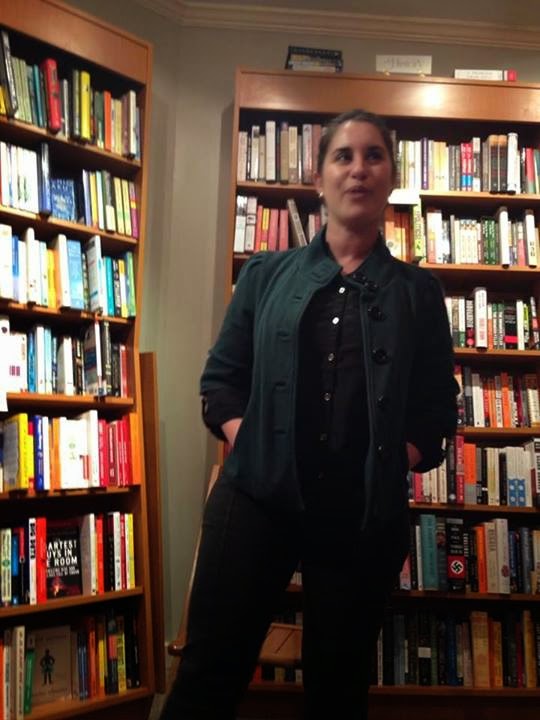 Given the number of actors and other performers who live in Astoria, it seems like an ideal location.  Are most of the people who have participated locals?

There's a lot of people from the neighborhood. Yet I've been pleased with how many people from Manhattan and Brooklyn come to the bookshop for the show as well.

Do you have a particular theme for the shows?

There's never a theme for the show. Anything and everything goes. 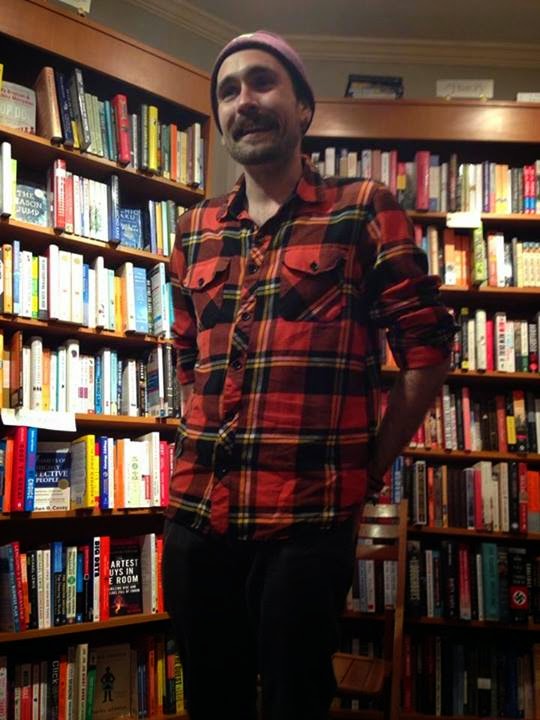 If someone wants to get involved, what should they do?

Decide what story to tell, say it out loud to yourself and make sure it's 5 minutes (which is the time limit at the show), then show up to 31-29 31st Street in Astoria (right near Broadway on the N/Q), write your name on a scrap of paper and put it in the glass fishbowl. That easy.

What have been your favorite stories so far?

So many. Oh god, so many. It's why anyone and everyone would love going to a storytelling show. You hear all sorts of wild stuff. A few highlights: The one about the Afghanistan War vet being let off from a speeding ticket by an emotionally patriotic cop. The one about not knowing anything about sports and talking to someone for 20 minutes only to later realize that "someone" was Lebron James. The one about having to run half naked out the fire escape because the person you're in the middle of having sex with tells you they have a girlfriend who just walked through the front door. 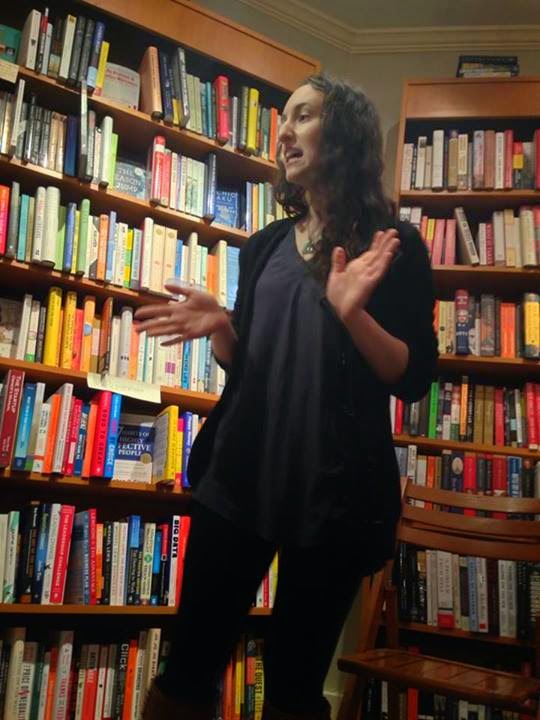 What are the next dates for the show?

Tuesday August 12th at 7PM is the next show. The one after that is on Tuesday, September 9th.

The Astoria Bookshop is located at 31-29 31st Street between Broadway and 31st Avenue, a short walk from the N/Q Broadway station.

The final curtain is drawing closer for the latest Blood Brothers show.  The four-part series ends in October with the much ballyhooed execution of the Blood Brothers.  Will it happen?  Well, Sister Blood doesn't survive episode three, so it appears it could. (If you want some background on the Blood Brothers, see some of the previous posts.)

"Losing Patients" features less gore than previous installments, but more intrigue as the stakes get raised.

As with previous installments of "The Blood Brothers Present... Bedlam Nightmares", "Losing Patients" features some short plays built into the framework of the Blood Brothers' incarceration in a hospital catering to the criminally insane.  The evening begins with an outstanding solo piece by Nat Cassidy (who often appears as a ghoulish troubadour in the Blood Brothers shows).  Directed by Patrick Shearer, "Who's There" features the talented Rebecca Comtois as a cop from a previous installment of the show, who is trapped in an abandoned area of the hospital, wandering through the halls with only her walkie-talkie to connect her with a partner who may or may not be there.  Comtois is a consistently strong actor, and she shines this creepy and claustrophobic piece.

The next short play, "Leslie and Sonia Forever" by Mac Rogers and directed by Pete Boisvert, features Leslie (Ivanna Cullinan), a character who has been integral to the "Bedlam Nightmares" series.  A disturbed woman who cheated on her husband with another woman, Leslie is normally the victim of the sadistic hospital guards.  At the bidding of Doctor Queen (Kristen Vaughan), the equally sadistic supervisor of the hospital, the older Blood Brother (Patrick Shearer) is left on his own to torture Leslie.  In a terrific twist that will clearly play out in the final installment, he breaks through to Leslie, pulling her out of her psychosis.  Troubled Leslie was a victim.  It looks like the new Leslie won't be.

The final play, and the longest of the three, is an outstanding piece full of teen angst, online betrayal and same-sex longing.  Deftly crafted by playwright Mariah MacCarthy, "Incitement" features a young, unpopular girl,  Shannon (Stacey Raymond), with a devastating crush on a popular classmate, Samantha (Sarah Matteucci).  After an initial sleep-over encounter that leads to a brusque rejection, Shannon creates online characters, a hot guy (Colin Waitt) to flirt with Samantha and a CIA agent (Stephanie Cox-Williams) who forces the naive Samantha to continue the relationship, with predictably disastrous consequences.  The play is a nice mix of ripped-from-the-headlines plot with a good eye for using theatricality to enhance a story.

The play that serves as the framework for the evening is "Losing Patients" by Mac Rogers, which features more of the interactions between Doctor Queen and the Blood Brothers (along with another inmate-turned-henchman, who is at Queen's beck and call, played by Roger Nasser).  In this Queen continues to drive a wedge between the once-inseperable brothers, finally winning the more brutal of the two (played by Pete Boisvert) over to her side.  While it is fun to watch Boisvert's usually brutal and thuggish Blood Brother regress into childlike behavior, it's amazing to see how Shearer's normally haughty and humorous Brother is stripped of all his power (and more importantly, his audience).  Watching Shearer play a a clever and desperate serial killer who is being backed into a corner is a delight, and I can't wait to see how the series ends.

Above all else, I hope it's bloody.