The Heat is On in Arlington: An Intimate "Miss Saigon" Opens Signature Season


By Mark A. Newman
Photo by Christopher Mueller

When Miss Saigon first opened in London and later on Broadway, it was a part of the British mega-musical invasion of the 1980s that included Les Miserables, Phantom of the Opera, Cats, Starlight Express, and Chess. Most of which were HUGE hits with so many cast members that the stages were seemingly too small to hold them all. Don’t forget the barricades, oversized tires, chandeliers, and helicopters that populated these spectacles.

And now Signature Theater in Arlington, Va., has brought Miss Saigon down to size in a tight production directed by Eric Schaeffer, and featuring a cast of less than two dozen. Miss Saigon as a chamber musical? Who knew? This compact version – which opened at Signature’s MAX Theatre this week – presents the tale of a doomed romance between an American G.I. and a Vietnamese bar girl as the infamous fall of Saigon approaches in 1975. The show’s score is filled with showstopper after showstopper and is a tumultuous journey for cast and audience alike.

Thankfully Schaeffer’s direction is fluid and tight, and the set design by Adam Koch has dumped a litany of airplane parts into the space that the cast maneuvers around admirably. One striking exit has three of the principals exiting their old lives at the end of Act I via an actual plane’s wing that doubles as an egress point. 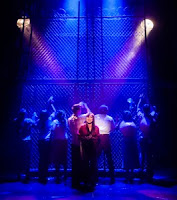 There is much to adore about this intimate production. First and foremost, the chance to simply hear the music performed live by an amazing 18-piece orchestra led by Gabe Mangiante is worth the ticket price. Also the cast is a winning ensemble, for the most part. I have to confess that there were a few of the principals who weren’t having the best night when I saw it, but they pulled through. In fact, the original actor playing Chris had to drop out due to vocal issues and was permanently replaced by understudy Gannon O’Brien, whose voice soars through the score. O’Brien’s Chris is not the traditional pretty boy hunk of productions past but he brings an authenticity the character and the desperate emotions of the story.

The role of Kim, the innocent country girl who has to learn how to fend for herself in record time is undertaken by Diana Huey, a vocal dynamo who brought the house down after virtually every number she had. Huey’s and O’Brien’s voices blend superbly in their passionate and bittersweet duets. As The Engineer, Thom Sesma brings a devious sense of humor to a character that we know we shouldn’t like – he’s quite the cad – but whom we end up rooting for despite his numerous evil deeds.

Those are the standouts. Chris Sizemore’s John was, at best, inauthentic and at worst, miscast. Previous U.S. versions of Miss Saigon cast an African-American actor in the role of John; Hinton Battle won a Tony for the role in 1992. His Act II opener, “Bui Doi,” normally a soaring aria about the injustice of “half-breeds in a land that’s torn,” came off a bit tepid and underwhelming. Also, Sizemore has a beard and shaved head, not a typical style in 1975. It should also be noted that the U.S. military typically prohibits facial hair of any kind in all branches. Am I being a bit of stickler? Perhaps, but authentic is as authentic does.

As Thuy the North Vietnamese soldier betrothed to Kim, Christopher Mueller sang the role magnificently. Problem is, he looks like a comedic actor; his resemblance to Jack Black was, in fact, a distraction. Even when he was on the brink of stabbing a toddler to death, he still didn’t instill fear or contempt. Yes, commenting on an actor’s appearance is pretty low, but let’s face it: theater is a visual medium therefore looks count.

One of the landmarks of the Signature’s production is a brand new song called “Maybe” getting its English language debut and is sung by Ellen (Erin Driscoll), Chris’s American wife. The tune replaces “Now That I’ve Seen Her” and “It’s Her or Me,” the previous two placeholders. Not only is “Maybe” not as good as these other songs, it’s not good, period. In fact, it’s just plain awful. Obviously there’s a problem with the character if three songs can’t get Ellen emoting about how Chris ought to choose her over Kim, so why not just cut the song altogether and have a dramatic sung-through scene using an earlier melody (“Fall of Saigon” or “Movie in My Mind”)? Or how about a quartet with Chris, John, Ellen, and Kim a la discussing the situation. Seriously, does the show need such a draggy ballad at this point, especially since the other ballads are such showstoppers?

While Koch’s sets have transformed the MAX Theater into a gaudy underworld, one set piece puzzled me but I don’t want to give too much away. It slides out centerstage at the end of The Engineer’s showstopper, “The American Dream,” a song that cements Sesma’s place in history as one of the best performers to ever undertake this multi-layered and complicated character. The item has been scaled down and is simply a small portion of a classic American icon. Its presence reminded me more of the finale of The Planet of the Apes, specifically the musical version that The Simpsons mocked so brilliantly.

Also, due credit must be given to the amazing lighting design by Chris Lee. This is probably the most astounding transformation I have seen of the space, and Lee’s lighting had a lot to do with that. From his subtle blues in the heartrending ballads to strategically positioned downlights that mimicked a helicopter landing, Lee’s rig should get a supporting character credit. And his use of sleeved, colored fluorescent tubes was spot on, striking, and beautiful in the sleazy way they were meant to be.
Make no mistake, the Signature’s production of Miss Saigon is unlike any that has ever been professionally produced, and with the show scheduled to be re-launched in London next year, this is a version that will likely never be seen again. In this show about a dismal slice of American history, Signature’s historical production is not to be missed.

Due to overwhelming demand, Miss Saigon has extended for yet another week until October 6.

What to do this weekend 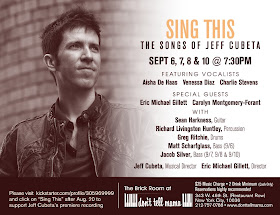