Two winters ago, Emerging Artists Theater presented a staged reading of Joe Godfrey's A QUEER CAROL, a twist on the Dickens holiday classic. This one-night-only holiday benefit for EAT was such a hit, it deserves to become a tradition! So we're bringing it back,and it's more twisted than ever. Choose your performance carefully, because it's the girls against the boys:

But there will be only one chance to see each version
See one, the other, or both, but don't miss it!

Directed by Melissa Attebery
Peter Saxe on the piano

This month's title photo is by Onno de Jong and is from an innovative "larger than life" family-friendly production, A Wonderfully Flat Thing, based on Mark Twain's short story, "A Fable," a magical journey of self-discovery told with puppets, dance, and music.

"The play's message is incredibly fun and relevant today on many levels,"”says artistic director Manju Shandler, who previously created masks and puppetry for The Lion King on Broadway. “"For kids, it is an entertaining riddle, a romp on stage with surprising puppets - an ostrich, a snake, a donkey, a house cat and an elephant prince! For adults, it's a piece about self reflection and how we interpret technology. The focus of the play is encompassed by Twain's moral: ‘You can find in a text whatever you bring, if you stand between it and the mirror of your imagination." 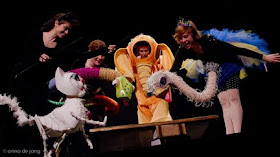 Join Mark Twain and his animal friends on a fun journey of self-discovery and magic. With puppets, dance, music, and interactive video projections, kids ages 3 & up will be delighted by this visual feast. Based on Mark Twain’s short story, A Fable, our talented cast discovers a mysterious “flat thing,” a mirror, and each sees something different. Is it magic? Only Mark Twain has the answer! A Wonderfully Flat Thing is an innovative children’s theater production your kids will love!

A Wonderfully Flat Thing is one of the first productions to be mounted in The 14th Street Y’s newly renovated LABA Theatre. It is the result of a collaboration between artist fellows from the 14th Street Y’s LABA: The National Laboratory for New Jewish Culture.

"The Godfather" gets a little of the Tom Stoppard treatment in this amusing play by Gregg Greenberg. Drawing on Stoppard's Rosencrantz and Guildenstern Are Dead, though staying away from the more absurdist elements of that work, Clemenza & Tessio Are Dead tells the story of "The Godfather" from the point of view of two of the minor, yet important characters, Peter Clemenza and Sal Tessio, as they play a waiting game while the larger events of the Corleone family play out.

Greenberg's script is full of humor, though as the major events (murders, the rise and fall of the Corleone brothers, etc.) turn dark, so does the play. There are not nearly as many laughs in second half of Clemenza & Tessio as in the first, but that's a good thing. 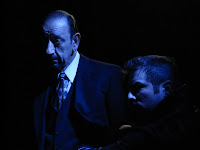 The most enjoyable part of Clemenza & Tessio comes from watching the strong performances of the lead actors Frank Senger (Clemenza) and Anthony Gallo (Tessio). Both play their characters with gusto, though Gallo's is the more nuanced performance. Joining them in the play is Troy Dane, who plays all the incidental roles, including Don Corleone and his sons, Michael and Fredo. Dane plays his roles a little broader than Senger and Gallo, though for the most part, it works.

Designer Nick Tochelli keeps things remarkably simple with his less-is-more set. Using only a few props, he creates a number of different locations. This pared down aesthetic lets the play move quickly (drawn out scene changes would have kept the tension from building).

Senger, who also directs, keeps things moving quickly, but the production never feels rushed or mechanical. I'm not entirely sure the play needs to have an intermission. It might be a stronger production without this interruption.

The main question I had about this show was would I be able to enjoy it, not having seen "The Godfather." I need not have worried. Greenberg's play never leaves behind the Godfather newbies. By focusing squarely on two interesting characters and their unique views of events mostly outside their control, Greenberg creates a play that will appeal to the aficionado and newcomer alike.

December 2nd through December 19th
Thursday-Saturday at 8pm
Sunday at 3pm
Byrne Harrison at 6:35 AM No comments:
Share

Jonathan A. Goldberg (Playwright - The Land Whale Murders) has had work seen at The Public Theater, The Barrow Street Theater, NJ Rep, the Theater Garage in Minneapolis, the Pear Theater in Northern California and the Complex in Hollywood. His play How to Shoot a Bull Moose won the Israel Baran award from the Theatricum Botanicum. He was a guest artist at the LABrynth Summer Intensive and was a Jerome Fellowship finalist. He won the Rita and Burton Award for Playwriting and received an MFA in dramatic writing from the Tisch School of the Arts. This summer he was the book-writer and co-lyricist for the Waterwell musical The Wizard of Wall Street, presented at IU for their Premier Musical Program. He is thrilled to be once again working with Shelby Company.

Tell me a little bit about The Land Whale Murders.

Jonathan: The Land Whale Murders is a murder mystery comedy set in Victorian New York City. It revolves around the death of one of The Four Elementals, the city’s self-appointed science elite. From there we travel to a misguided bird release, a missing whale, more murder, the birth of NYC’s first super hero, and much more. It’s a jam-packed adventure with fights, fish, fowl, running away from danger, and terrible deductive reasoning.

I like the idea of a play that touches on eco-terrorism, but is set in the Victorian era. What influenced you to write on this topic, and as a murder mystery to boot?

Jonathan: The Victorian era provides a treasure trove of references and touchstones that can be mined for comedy as well as provide a window on where we’ve gone wrong environmentally. By setting the play in this time -- loosely, there are several anachronisms -- it gives us a chance to explore our complicated relationship with ourselves and the natural world. I felt that the murder mystery structure would be the best way to shape this story. There is a lot of information and ideas being thrown at the audience, but it’s wrapped in a familiar structure. There is this one basic mystery that is set up at the beginning: “Who killed Hiram Blud?” This anchors the play and ultimately everything that happens—wild as it gets—is all tied to this event.

If you could say one thing to your potential audience, what would it be?

I understand that The Land Whale Murders has a steampunk aesthetic. What was it like working in that style?

Tom: I wouldn’t say it has a steampunk aesthetic per se, though there are definitely elements in common. Jonathan set his play in an impossibly fantastic 1896 New York and chocked it full of anachronisms and inaccuracies, particularly in the language. So a lot of the early talks were about how to reconcile all that design-wise. Jason Simms (set designer) brought it up first, and Deanna (costume designer) really ran with it, and it turned into this sort of sexy opium chic – a demimonde that never existed.

Why do you think this style seems to resonate with audiences?

You mentioned some of your collaborators. Tell me a little bit about your design team.

Tom: The design team for The Land Whale Murders is a murderer’s row of theatre genius. Jason Simms’s devised a gorgeously simple set that frames the action perfectly. Deanna Frieman’s costumes are worth the price of admission alone. Greg Goff’s lighting is endlessly evocative and does almost all the heavy lifting with time and place. And M. L. Dogg is simply one of the best in the biz; an omnivore of sound. Our secret weapon though is Rod Kinter, who did all the fights – he is the Petipa of Punch, the Fokine of Fence, the Robbins of Roughhouse.

This is not your first collaboration, having worked together on Luck of the Ibis earlier this year. How did that familiarity help with this production?

Jonathan: Tom and I have worked on several projects now. We first met when I was a grad student at NYU. He was a guest director in a class at the Public Theater and we created a fast paced non-musical musical called Capitalism: The Musical! It had like 20 parts played by 4 actors and was performed in a hallway, but was a lot of fun. Tom has an amazing touch as a director and I think he brings a grounding and inner reality to my work. He isn’t afraid of my stage directions like “a dead bird falls from the sky” or “underwater ballet.” He’s very inventive and I think enjoys the challenges my scripts present him. I feel that anything can be achieved on stage and Tom has never tried to limit me or scale back my vision, if anything he’s found a myriad of ways to improve them.

Tom: I love Jonathan. For my money he’s the most exciting young writer working right now. This is our fourth project together this year, and each one has been a joy. In a way Land Whale is the show that started it all. I came to a reading at an apartment in Brooklyn last year, and that’s when we got reacquainted. Familiarity breeds trust. And contempt. Fuck off, Jonathan.

What's next for both of you after this production?

Jonathan: I have a few projects in the works. Some readings are coming up along with some of my short work featured at the Jewish Humor Festival in Minneapolis, Minnesota in January. Also I’m working with Waterwell on a musical about financier Jay Gould. The show had a workshop production at Indiana University this summer and we’re looking to take the next step with that.

Tom: Version 2.0 of The Wizard of Wall Street – the Jay Gould show. And Waterwell’s monthly run of Goodbar, our concept concert based on Looking for Mr. Goodbar, created in collaboration with glam/punk band Bambї. This is also the inaugural year of Waterwell’s Drama Program for 6-12th graders at the Professional Performing Arts School (PPAS), a hugely rewarding challenge. Directing-wise, after this I go right into rehearsals for Art at the Playhouse on Park in West Hartford – starring among others Land Whale’s own Rich Hollman.

Finally, what advice do you have for any theatre students who might be reading this?

Jonathan: Don’t be afraid to take big risks and to even fail at times. An exciting failure is always better than a mediocre success. Also don’t let anyone tell you something is impossible; the stage is limitless and you can put anything you want upon it. Also find people who are like-minded and surround yourself with them. People from all corners of the theater world: designers, writers, directors, and actors - support them and cheer on each of their victories. There’s enough people out there who want to tear things down, don’t be one of them – try to always look for the good in things. Sorry if that sounds too much like a fortune cookie. Ultimately though, work with people you like, it makes life a lot easier.

Tom: Sleep your way to the top. That’s how I got here.

The Land Whale Murders
Written by Jonathan A. Goldberg
Directed by Tom Ridgely 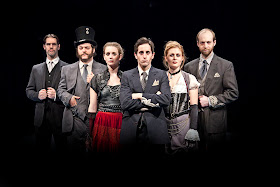