Duncan Pflaster is a multi-award-winning playwright who has been doing theatre in NYC for 11 years, most famously his Big Epic Naked Shakespearean Fairy Tale Play Prince Trevor Amongst the Elephants. He also writes music, plays ukulele, and (occasionally, if his arm is twisted) acts. 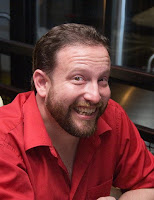 When did you first get involved in theatre?
I grew up in South Florida; my mother Grace was a local actress and was instrumental in my first involvement in theatre. The first real play I did was at age 6, a production with Royal Palm Children’s Theatre of Winnie-the-Pooh, in which I played Christopher Robin. I was the youngest member of the cast—all the actors playing my stuffed animals were college-age or older.

What is your theatrical background?
For a long time I thought I would be a professional actor. I studied acting at New World School of the Arts in Miami, with Carol Cadby and David Kwiat as my main teachers (and took my only playwriting class, taught by Eric Bedenbaugh); I was kicked out after a year—they told me I’d never be an actor if I stayed at the school. I went on to Florida Atlantic University, where I had the opportunity of a wonderful class taught by Visiting Eminent Scholar Zoe Caldwell, whom I can’t credit enough with my understanding of text and how actors relate to it. I wrote my first full-length play as a joke—in the mid-90s, I was acting pretty consistently at Florida Playwrights' Theatre in Hollywood, FL, and one night, while drinking after a show, a friend said, "Wouldn't it be funny to do a drag queen Alice in Wonderland?" and a year later I finished Wilder and Wilder and it went onstage almost immediately at FPT (with me as The Queen of Hearts), first as a late-nite show, then when there were problems with the mainstage show which had to close, my play ran at 8pm for a couple of weekends. I try not to act much these days (I very rarely consider auditioning- I'm tempted by Sondheim musicals, clown roles in Shakespeare, and sometimes my friends’ plays) since it’s so hard to work 9-5, rehearse in the evenings, and still find time to do the writing that I consider my true vocation. I really don’t have much training in writing plays (aside from simply writing and producing them), so it’s ironic that it’s become my main focus.

What is your best theatrical memory?
I’d have to go with the production of Prince Trevor Amongst the Elephants that I wrote and directed in the Midtown International Theatre Festival in 2008. A spectacular cast of 12 who were all good and nice people on top of it. Show was great, we got some great reviews (as well some of the worst reviews of my life), and were nominated for nine MITF awards, eventually winning three: Outstanding Production, Outstanding Comedy Script, and Outstanding Lead Actor (Carlos Rafael Fernandez, who played Prince Trevor). Such a joy.

What are the best and worst things about working in theatre in New York?
Best: The amount of amazing talent there is available to work with; I keep meeting wonderful performers I want to cast in my plays. Worst: The number of competing productions makes it very easy for a play to get lost in the crowd.

Do you have any advice for students who are planning a career in theatre?
To be cynical for a moment: find a school that has a “mafia” in New York. So much of NYC theatre is not a meritocracy; it’s based on luck and who you know. Often people will give a leg up to folks who went to the same school, so it’s a good idea to make one’s own luck and stack the deck in your favor. Non-cynical answer: Learn as much as you can about all aspects of theatre, not just the element that’s your focus. If you can essentially put up a play on your own, you're in a great position to work; you never know what you might be called upon to do (and maybe get paid for!).

What's next for you in 2010?
I'll be doing my 10-minute play (they kiss) in the February 26-27 Short Play Lab at Where Eagles Dare, curated by Jonathan Wallace (The Play Plays- all plays about the experience of doing theatre), and then in March I'll be doing a few short plays at the Digable Arts Festival in Jersey City. After that, a few things are tentatively scheduled, pending official confirmation- I’ll be adapting and directing a production of Shakespeare’s Timon of Athens for Howling Moon Cab Company, starring Clara Barton Green in the titular role, this Spring. I hope to have new plays in both Planet Connections Theatre Festivity (The Thyme of the Season, my sequel to A Midsummer Night’s Dream) and the Midtown International Theatre Festival (The Starship Astrov: Chekhov in Outer Space!) this Summer.

To find out more about Duncan, visit his website or his theatre blog.
Byrne Harrison at 1:00 PM 3 comments:
Share
‹
›
Home
View web version