The play centers on a couple, David (Paul Geiger) and Michelle (Pilar Witherspoon), their son, Jake (Evan Robert Smith), and David's best friend, Marty (Michael Boothroyd). David and Michelle are merely going through the motions of their marriage, and each blames the other - David no longer seems interested in Michelle, Michelle is too busy with her job. Of course, the truth is deeper than that, which Jake discovers when he catches David and Marty during a tryst at the house.

Michelle is devastated and vows to keep Jake away from David by any means necessary. She also forbids Marty from seeing her son, although he has been like a third parent to Jake, filling in for Michelle and David when they've been too busy for their son. In order to make this happen, she embarks on a scorched earth campaign against David, making vile public accusations against him.

As would be expected from an incubator series called Short Subjects, The Talk is a very short piece, however playwright Gabrielle Fox has written a surprisingly tight play. Although she ties up all the loose ends into a satisfying ending that provides a strong message about individual needs versus the needs of a family, the play seems rushed. Fox has taken on a number of challenging topics - sexuality, infidelity, revenge, and childhood trauma, to name but a few - that seem somewhat too tightly packed in her short play. While I often lament the number of plays where the playwrights seem to drag out topics that don't justify full-length treatment, Fox's play could easily be expanded and some of the topics explored in depth. In addition, a longer format would allow better development of the relationships between the characters, specifically the triangle involving David, Michelle, and Marty. Of the three, Michelle is the most fully realized character; a little fleshing out would benefit David and Marty.

Troy Miller's direction is adequate, though not up to his usual high standards. He seems to have given his actors more rein than normal, and though Witherspoon is up to the challenge, the others at times falter, not allowing certain scenes to have the full emotional impact that they should. Overall, however, the production has more strengths than weaknesses, and I'm sure we will be seeing The Talk again in the future.

It's encouraging to see the types of work that John Chatterton Presents, Inc., is bringing to stage. The Talk is exactly the type of timely and though-provoking work that should be getting produced.

Two minor characters playing a small, albeit important part in the story of Hamlet - Rosencrantz and Guildenstern. We know them as schoolmates of Hamlet, somewhat interchangeable courtiers, and spies brought to court by Hamlet's uncle Claudius. Tom Stoppard brings them front and center in Rosencrantz and Guildenstern Are Dead, and while it's easy to describe the play as the story of Hamlet as told from the point of view of these two minor characters, it is so much more than that. Stoppard's play is a meditation on the nature of life and each person's place in it. Is there a purpose to our daily struggle? Are we merely minor players whose lives are guided by others? Or is it all chance, with no rhyme or reason?

Eric Percival (Rosencrantz) and Julian Elfer (Guildenstern) make a winning team as the bemused courtiers. Percival's Rosencrantz seem constantly bewildered as he tries to comprehend the situation he finds himself in. Elfer's Guildenstern wants to make sense of what is happening around him, but finds himself unable to do so. Rounding out the major players is Erik Jonsun, who does a terrific turn as The Player, the leader of the band of tragedians who will eventually perform "The Murder of Gonzago" for Claudius and the court - the play wherein Hamlet catches the conscience of the king. While the rest of the cast does an excellent job, the play truly crackles when Jonsun's Player is involved.

Rosencrantz and Guildenstern Are Dead features strong direction by Cat Parker, who makes great use of George Allison's elegantly understated set. Played in the round, Parker utilizes the entire space, often surrounding the audience with players, effectively incorporating them into the production.

T. Schreiber Studio once again does what it does best - producing outstanding performances of challenging and entertaining plays. 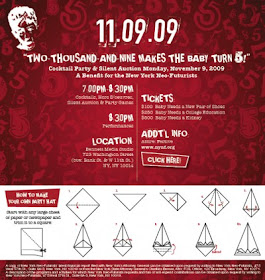 Just in time for Halloween, the Blood Brothers are back with a new evening of horror. After their most recent two shows featuring their take on pulp/noir and the works of Stephen King, their 2009 show returns to the Grand Guignol roots of the original 2006 production that started off this series. The New Guignol rips its terror from the headlines and reminds us that the scariest thing that we can encounter is other people, not the supernatural horrors and bogeymen that are the creations of our own imaginations.

Using real stories as their jumping off point, and proving it by showing copies of the newspaper articles from which they are drawn, The New Guignol presents tales of incest, beheadings (two, in fact), obsession, jealousy . . . well, all the things the Blood Brothers thrive on.

Featuring short plays by Danny Bowes, James Comtois, and Mac Rogers, The New Guignol returns to its Grand Guignol roots by focusing on the gore and savagery of the stories. This takes the form of incestuous rape, the aforementioned beheadings, cannibalism, and the usual brain spatters and gory knifings that we've come to expect from these shows. I will admit, though, that despite the subject matter, this year's production seemed rather less bloody than the previous ones. Ghoulish as it sounds, I wanted a lot more blood, not merely for the shock value, but for the opportunity to admire the special effects. That's not to say that Stephanie Cox-Williams skimped in her special effects design work this year (for the record, the effects were very well done - especially a rather gruesome C-section), it's just that there could have been a lot more of it.

The strongest play of the evening is Biological Mother by Mac Rogers. This tight, well-acted play about a young man seeking his birth mother, and the terrible secrets he unearths, is the most solid of the evening's shows. It features taut direction by Pete Boisvert and some strong performances, particularly Cotton Wright, Jessi Gotta and Marsha Martinez. Among the other strong performances are Becky Byers and Robert Leeds in James Comtois' A Room With No View and Jessi Gotta again in Comtois' creepy The Itch. 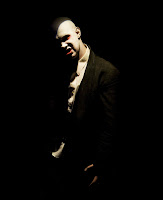 Overall, some of the best moments of the show (and this is true of the previous Blood Brothers productions, as well) are those featuring Pete Boisvert and Patrick Shearer as the ghoulish Blood Brothers. Shearer excels as the erudite and well-spoken sociopath, oozing charm and menace. Boisvert's strength is in playing the more bestial brother in a way that inspires both laughs and fear.

As with the best horror, there has to be a little bit of a twist to shake things up a bit. In The New Guignol, the twist involves incorporating the audience into the show. It's not something so mundane as audience interaction; that's not really the Blood Brothers' style. But this clever and chilling "There but for the grace of God go I" moment, ends the evening on a decidedly creepy note.